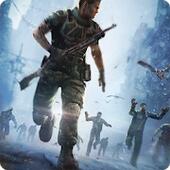 DEAD TARGET: Zombie Plague - Fantastic zombie shooter on Android. The game takes place in 2040, after the third world war. The Minister issued a decree on biological weapons, the creation of a super strong and hardy fighters. But something went wrong and the people began to mutate, all died. In the world of gushing wave of zombies. You survived, and whatever had happened must save the world from the zombie apocalypse! Your arsenal will be filled with various kinds of modern weapons, with it you will be able to attack the hordes of zombies! The game also has a fierce boss with whom you have yet to meet!