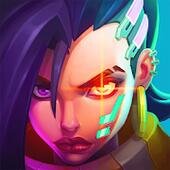 3.3
Total votes:4
Download
New version release notificationsAfter updating the application, you will receive notifications by mail
Subscribe to updates
Total Subscribers: 2
Robot Assassin: Bullet Fight MOD many coins/stones - The fantastic war of robots is preparing new outbreaks of attacks, crazy battles, a new battle experience in the next stages of the waves is provided for you, a huge selection of characters with their skills and abilities, rather start playing and save this world playing as a killer robot. Choose your hero and start an endless battle with enemies, get as far as ever setting your records, slide your finger on the screen to dodge enemy attacks and obstacles, letting go of your decisive blows to opponents. Increase your chances of survival and increase your strength, improving your character and putting on new armor.