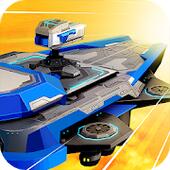 5
Total votes:1
Download
New version release notificationsAfter updating the application, you will receive notifications by mail
Subscribe to updates
Total Subscribers: 0
Ark Rivals MOD much money - Join the most exciting space game, start controlling your own spaceship and take control of an entire planet. Join the battle and conquer resources from the enemy arks and freeing captured citizens, with the help of the collected resources you can improve and expand the territory of your base without giving opponents a chance to win. Play together with other players creating your own clan and teaming up, go through many trials and battles defeating giant bosses together.