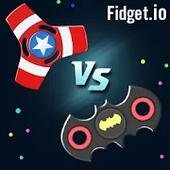 4.8
Total votes:75
Download
New version release notificationsAfter updating the application, you will receive notifications by mail
Subscribe to updates
Total Subscribers: 3
Fidget Spinner .io Game MOD a lot of coins - A fun multiplayer arcade game with very simple controls and difficult to learn. You will play for spinning against the rest of the players who will be your opponents, your task is to absorb small particles and thereby grow in size, conquer new territories and absorb other players who will be smaller than you in size. Come up with a strategy, avoid opponents more than you do not die, change the skin of your spinner and become the biggest spinner among the other players.