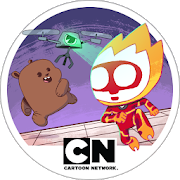 4.9
Total votes:30
Download
New version release notificationsAfter updating the application, you will receive notifications by mail
Subscribe to updates
Total Subscribers: 1
Cartoon Network Party Dash MOD much money - Action game with your favorite and funny characters from Cartoon Network for which you can play. Our heroes gave themselves a party in the forest and everything was cool, but someone decided that everything had to be spoiled and they managed to do it, now you will take revenge on your enemies who spoiled the grandiose evening playing for the legendary characters, your task is to go down to the bottom, destroy Obstacles in your path and destroy enemies, as well as collect coins for which you can later win a steep prize, or buy new costumes.